Where Nobody Knows Your Name - John Feinstein

For sports fans, Christmas Day is when John Feinstein

Feinstein is unquestionably the greatest sports author of our time, and this week he releases his latest gem - a behind the scenes look into minor league baseball's International League.  An absolute must-read for all sports fans.  Even before you purchase my book

(Well ok, right after that)

In his latest book, Where Nobody Knows Your Name: Life In the Minor Leagues of Baseball

, Feinstein "introduces readers to nine unique men: three pitchers, three position players, two managers, and an umpire. Through their compelling stories, Feinstein pulls back the veil on a league that is chock-full of gifted baseball players, managers, and umpires who are all one moment away from getting called up—or back—to the majors."

I was a fan of Feinstein's work well before my time calling Army Basketball games.  Feinstein spent the entire 1999 season with us in the Patriot League, writing The Last Amateurs: Playing for Glory and Honor in Division I College Basketball

.  It was uncanny how he captured the most touching, poignant and heartfelt moments from that Patriot League season.  Plus he's a super guy (that gave me a personal tour of Duke's campus one afternoon.)

The great thing about John Feinstein's books is his knack for taking readers into the action and truly letting us experience sports behind the scenes.  His latest baseball book will undoubtedly become his next grand slam.
Thanks John!

Nonstop Cliches From The Booth

How can you tell the lazy sports broadcasters?
Just count the cliches and crutch phrases. 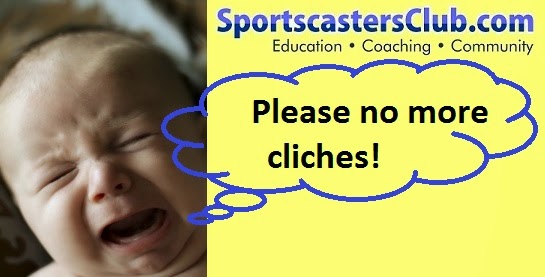 Sports broadcasting is no different than any form of communication - be as clear and concise as you can to increase the precision with which your message resonates.  Simple, right?

So why, then, do sports fans constantly hear their favorite broadcasters spewing nonstop cliche and crutch words?

"He's just not on the same page with his catcher."
Are they in a book club together?

"They really stepped it up in crunch time"
Up to where?  Is it Nestle Crunch?

"Jones on the right, passes now to Davis left baseline"
When else would it be?

"We've got a great game here tonight"
Where else would it be?

"Now we send it down to Joe with our player of the game"
"Thanks Dave, I'm here with....."
What are you thanking him for?

"Well, this team just didn't show up tonight"
Really?  Was it a forfeit?


"Defense wins championships"
Not if the other team plays slightly better defense.

"The game is on the line"
The clothes line?

OK, you get the picture. Much of what we sports fans and broadcasters actually say during and about our favorite sport is complete nonsense.

What are your favorite - or least favorite - sports cliches?
-----
View the FREE Report -
7 Tips To Get Started In Sports Broadcasting (Including 3 myths that may shock most sports fans)

Spilling The Beans On The Air

As sports fans, we often think we know what players are thinking.  On the field we assume they must be anticipating the next play or contemplating strategy.  Off the field, we assume they don't have a worry in the world.  Well, we know what happens when we assume....we are often very wrong!  It turns out that quite regularly the players are are focused on the broadcasters!

Broadcasters get a candid, eye-opening look into the real thoughts going through players' heads during a game.  While broadcasting for a professional baseball team in the mid 1990's I had a second baseman say he was always looking up at us in the broadcast booth, wondering what we were talking about.  He yearned to switch spots.  ( I would have obliged) Another time, the third base coach turned toward my broadcast perch above the third base dugout and actually answered a question I had posed to listener on the air.

Perhaps one of the strangest encounters I had was when a pitcher called me aside one day before the game.  There was something on his mind.....something that seemed to be causing him some real distress.  We had become quite friendly, and he had recently introduced me to his wife.

"Do me a favor, " he said. "Please don't mention on the air anything about my wife."

It turns out that the two had married hurriedly without the knowledge of either family.  His concern was that I would spill the beans on the air, where his parents and family would hear back home via the streaming internet broadcast.  I would blow the whole thing!

Never in a million years did I think this star player would be worried about something I - the lovable broadcaster - would say on the air.

I never once mentioned his secret - until now.  But I certainly thought about it often, each time I saw him on television playing in a big league uniform.
---

Still Pitching: Baseball, Dark Days and Salvation: The Story of The Fish 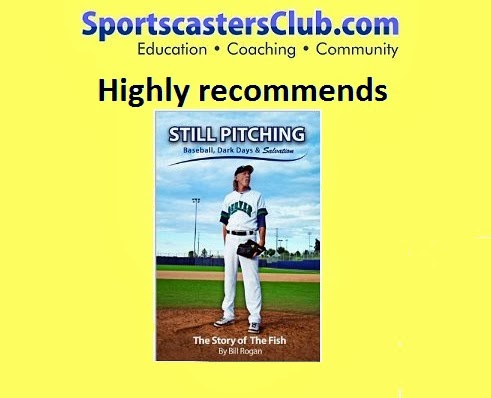 America loves baseball because it is such a great imitator of life.  Once in a while a book comes along that captures that feeling precisely, and   Bill Rogan has just released that kind of baseball classic.

is a wonderful look at how a courageous man maintains baseball as a focal point of his life, even as that very life seems to be crumbling all around him.  This is a story about great faith - of God, self and mankind.  A unique baseball book that stands out as truly authentic.  An Andy Andrews

The book reveals how the hand of God reached out and touched Rick Fisher, pulling him from the depths of despair.  Rick's journey back - guided by his constant love of baseball - is a true story that transcends any game.  This is real life redemption off, and on, the baseball diamond.

Still Pitching is a baseball book that teaches us so much about life.  You will enjoy it immensely and eagerly pass it along for years to come.  Once you do, please let us know your thoughts!

Click here to view Still Pitching: Baseball, Dark Days and Salvation: The Story of The Fish

Giving Vision To The Blind

Play by play broadcasters know it's all about the eyes. 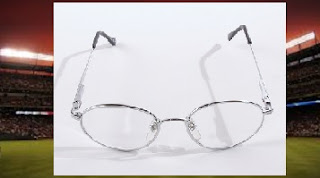 On radio, your main focus should be your listener's eyes.
Radio voices know their primary duty is to paint the word picture and let the listener "see" the game.  Let your words give them vision.  Radio sportscasters give vision by painting that word picture in the mind's eye of the listener.
A broadcast colleague once told me of the blind season-ticket holder, who would sit aside him and "watch" the game.  He saw and felt the action through the broadcaster's words.  Descriptive terminology.  Precise court geography.  An active vocabulary.  These all played their part in the blind fan being able to see the game.
I always kept this fan in my mind when calling a game.  He made me a much more detailed and accurate sportscaster.
Do you think he can help you too?
---------
Take a look at much more about "painting the word picture"

Ralph Kiner was everything that makes baseball special.  From his slugging career to his grandfatherly commentary, Ralph Kiner made you feel connected to the game.
So much has been written about Kiner this week.  A lengthy tribute so well deserved.
One of his most well-known broadcasting insights was that "Two thirds of the earth is covered by water; the rest is covered by Garry Maddox."
He always gave the viewer an honest answer, sprinkled with anecdotes and experiences.
When asked why he didn't choke up on the bat, Kiner said, in his ever-honest style,
"Cadillacs are down at the end of the bat."

For so many fans and broadcasters, Kiner was a connection to baseball's glorious past.  Thankfully, his impact will endure for years to come.
-----
Click here to save 50% on our new online Sports Broadcasting Course

How To Broadcast A Dog

Sometimes the game just plain stinks!  There's nothing you can do.  You prepare, you plan, you prepare some more.....and then when the lights go on, the game is an absolute DOG!
This year's Super Bowl XLVIII was a reminder that, as a broadcaster, a main part of our job is to prepare as though the game will be a blowout.  Most competent voices can call a close nail-biter, but it's the real pro's pro that can make a yawner seem important or, dare I say, exciting. 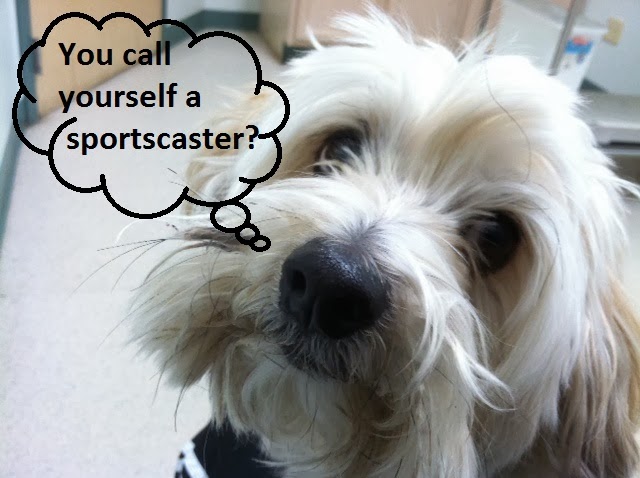 I often hear one particular critique of Joe Buck (who we happen to think is terrific).  It's that he's too cutesy and over-pushes the comedy.  I don't quite agree with that criticism, however in a blowout this "weakness" could be considered a strength.  This is when personality and, even to a greater degree, the value you bring from thorough preparation carries the day.
Buck is usually stellar, and Super Bowl XLVIII gave him another chance to prove it.  Woof Woof!
-----
Click HERE for 3 hours of Sports Broadcasting education!

Wow, 48 hours after we launched and we already have 250 students!

The new online course is a  fun, exciting inside look into the sports broadcasting industry. We explore the many aspects of sports broadcasting and teach you how you can improve. We give you the nuts and bolts of how to break into this industry and succeed!

For sports fans, this course will give you an enjoyable look "behind the scenes" at the life of a sports broadcaster. You will enjoy the game more because you will truly understand what real-life sportscasting is all about!
Perfect for:
Aspiring sportscasters looking to break into the industry
Casual sports fans that simply want to have some fun
Established professionals who want to grow their career

We'll see you there!  Click the pic to get going!