Teenagers these days don't hang out with each other.  Rather, they stay home and talk virtually through their smart phones and devices.

A mother recently told me this about her teenage daughter.  Aside from being quite scary, this also gives us a great insight into he psyche of the younger generation of professionals, and broadcasters.

Technology is a terrific way to create, build and expand your brand as a broadcast professional.  Sports broadcasters are able to network and share like never before.  This is not just a good thing, but a GREAT thing for building your broadcasting career!

Don't think for a moment, however, that you can lay at home on the couch and "virtually" network your way to the sports broadcasting career of your dreams.  For this, you'll still need good old-fashioned people skills.  You know, those communications abilities you paid the school tens of thousands for.  Just ask our friend, Dan Miller.  His advice for landing that dream job is priceless.

New technological advances are wonderful for building and growing your sportscasting business, but don't be fooled into believing this alone is enough.  You still must get out there and make it happen.  And that means flipping off the phone and getting out there with real people.
----


Minor league baseball life is not glamorous at all.  At least most of the time.  As a result, minor league broadcasters often find humor in the smallest things.  You are in a season-long bubble and trivial events can seem SOOO important. 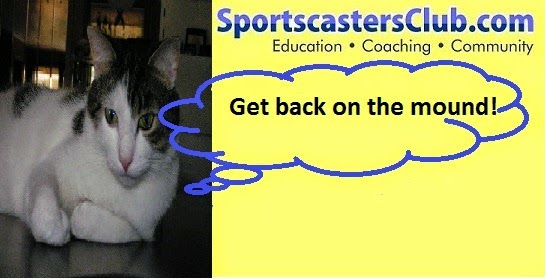 One such story involves a minor league team’s closer, who spoke often of how he was being groomed to be the eventual big league closer.  He was riding buses in the Bush Leagues

simply until the time was right for him to assume his role in the Major Leagues.  Just ask him – or not – and he’d tell you.  He was a good guy with a jovial nature.
I recall one late-night stop after a road game.  The team was hungry after playing a game, and the bus pulled to the side of the road, between a half-rate fast food joint and a convenience store.  Those are your options boys.

Half of the weary team ambled into the convenience store.  After about 30 minutes, most of the players were safely back in their seat on the bus, ready for the long trip ahead.  All the players except one.

A few minutes later the door to the convenience store popped open and out darted a stray cat, which darted across the street and into the darkness.  A moment later, the team’s closer slowly stepped out and up into the bus.  The right sleeve of his multicolored summer shirt was ripped, nearly torn from his torso.  He looked as if he’d been involved in a bar fight.  The team erupted in laughter.

“I found this cat in the store,” he explained  “I tried to rescue it and get it home safely, but while I was cornering the cat near the chips I caught my shirt on the rack and ripped this huge hole!”
Although a bit sore, the team’s closer was back on the mound the next day.  Even more ridiculous than that....inside the Groundhog Day of minor league baseball, this was a big deal to us.
-----
Click here for more truly unbelievable minor league baseball stories